Scientists estimate that on average, a human being has 37.2 trillion cells.  In every cell, there is a nucleus (except for red blood cells) which contains identical sets of chromosomes found in pairs.  Pairs of human chromosomes are numbered from 1 through 22, with an unequal 23rd pair of X and Y chromosomes for males and two X chromosomes for females.  Chromosomes carry the genetic characteristics of each individual, collectively called the human genome. Each chromosome is a flexible structure made of material called DNA, which is one long molecule that appear like tightly coiled strands.  The coding order of the DNA makes up genes, which are a segment of a chromosome.  In other words, genes contain the code for making proteins, the building blocks of life.

If you were to pull out all the chromosomes into long strands of DNA there would be over 7 feet of DNA in each cell! That’s about 80 billion miles of DNA in the average human adult! 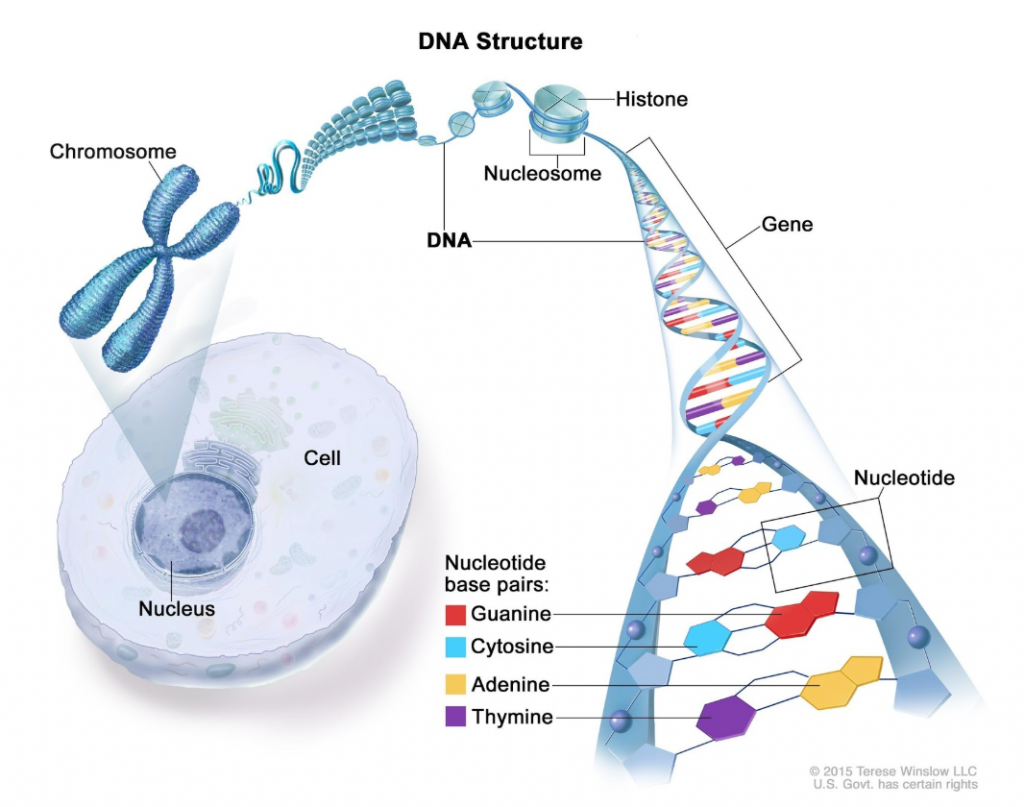 Each chromosome has a short arm designated as “p,” a long arm identified by the letter “q,” and a narrowed region at which the two arms are joined (centromere). Chromosomes are further subdivided into bands that are numbered outward from the centromere. Telomeres are cells at the ends of the chromosomes which protect it. For example, the distal portion of the short arm of chromosome 8 (8p), sometimes referred to as “8p”, includes bands 8p21 through 8p23; the end or “terminal” of 8p is known as “8pter”.

During cell division, or mitosis, a parent cell divides into two or more daughter cells. Each new cell gets a complete copy of all the DNA from the parent cell (all 46 chromosomes). Cell division regulated itself depending on needs for growth and repair, and do so at different rates for different types of cells.  Nerve and brain cells divide much less often than skin cells, for example.

In genetics screening, a karyotype is an actual photograph of the chromosomes from one cell. The cells analyzed are usually white blood cells.  Cytogenetics is a word for the study of chromosomes.

Below is a map of Chromosome 8 (source NH):